The Vanak cathedral is one of the important attractions of the country located exactly in the Jolfa district, Isfahan.
This church is one of the historical churches of Isfahan related to the Armenians. Here was built in the Shah Abbas II era. The Vanak means monastery in the Armenian language. The cathedral was established in 1606, dedicated to the hundreds of thousands of Armenian deportees that were resettled by Shah Abbas I. The varying fortunes and independence of this suburb across the Zayande River and its eclectic mix of European missionaries, mercenaries and travelers can be traced almost chronologically in the cathedral’s combination of building styles and contrasts in its external and internal architectural treatment. 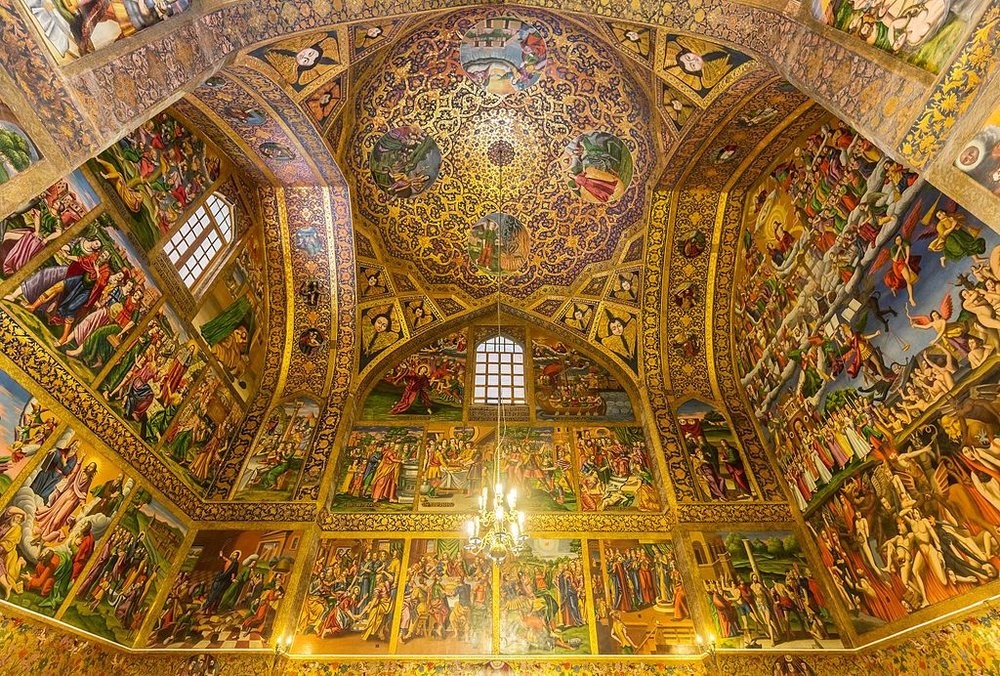 The temples are relaxing places to worship god who is present and observer in every second of life and will not leave us alone definitely.
On the other hand, the endless kindness of this passionate and merciful creator motivated his creatures try their best and construct many amazing and unparalleled temples.
They constructed beautiful and eye-catching buildings to enjoy spiritual environment.
Moreover, the existence of Christian people in Iran was the main cause to build many churches and provide possibility to perform religious ceremonies of Christian compatriots. 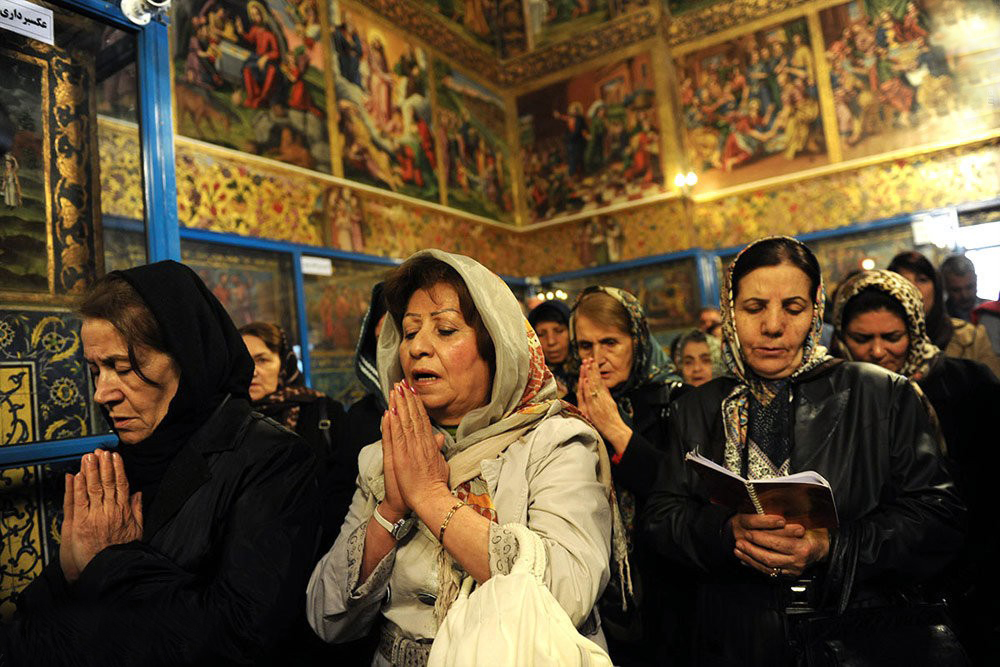 The Vanak church is considered among these churches and is known as one of the most famous churches of Iran and also the largest church of Isfahan due to variety of historical paintings and embellishments.
This church was built based on combination of Persian and Armenian architecture which is completely unique around the world.
In addition, the cathedral is privileged to have excellent location making possible to spend happy and joyful moments in most famous cafes of Iran.
It should be noted that all travelers are amazed upon arrival to the Jolfa district of Isfahan as if people are traveling to the past periods. 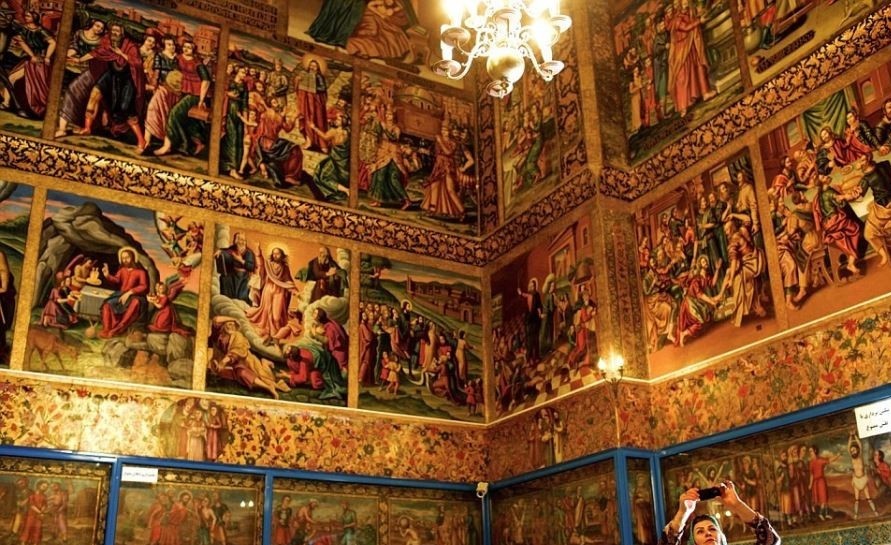 According to the existing information, there are about 13churches at the moment in Isfahan. Every church has its own and special features but the Vanak cathedral is shining like a diamond in the middle attracting you toward its interesting world.
Here was the most important center to teach a large number of priests. This cathedral is the most important church among Armenian people and can be considered as a link between Armenians of Isfahan and south of Iran with the world.
On the other hand, this cathedral is hosting a large number of tourists as the largest museum in Isfahan.

In addition, the library of this complex is also known as one of the most important Armenian centers of the world due to having historical documents gathered in the course of about 400years.
Here was registered as a national property with No.85 in Iran’s cultural heritage organization in 1972 due to its unique and unparalleled features.
It is noteworthy that lots of Armenian famous elders are buried in the outdoors of the cathedral.
All churches of Isfahan were built by Armenian architects but it should be noted that there is no similarity between them and churches of Armenia. For instance, the façade of Isfahan churches located in the Jolfa district are completely different from other Armenian churches having some features similar to the Isfahan houses with no embellishments. 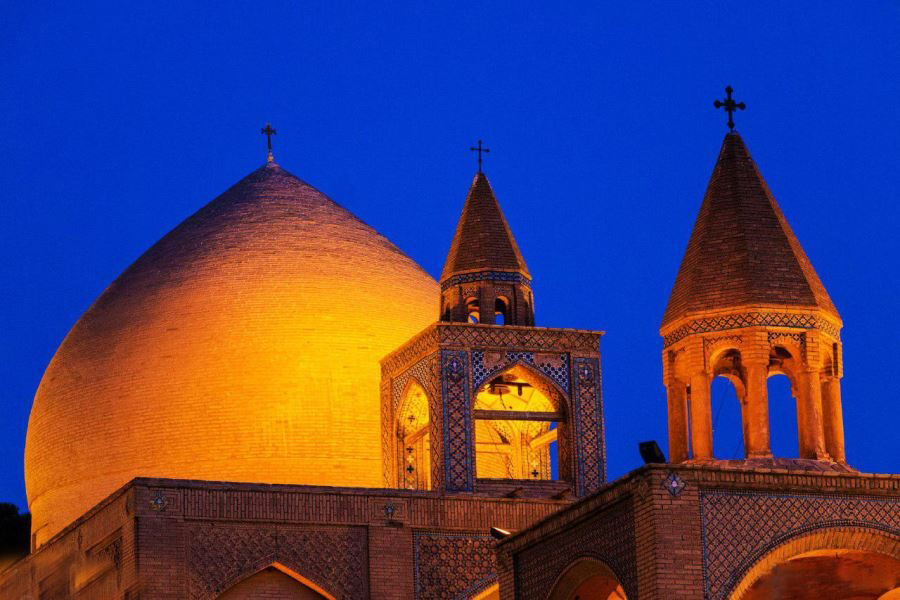 Furthermore, all domes of churches of Armenia were constructed in cone shape but domes of churches in Iran are in arch shape inspired by architectural style of mosques.
Due to wide range of very beautiful paintings on the internal walls, here is highly recommended to visit and enjoy in the best possible way.
In other words, the Armenian artists created very eye-catching paintings related to the Holy Bible on the walls of Isfahan churches based on Iranian and Armenian art and also inspired by European especially Italian style.
The area of the complex was expanded over time and new functions and sections were added such as printing house, library, official sections, museum etc.
The museum of the complex includes variety of amazing and exciting parts such as collection of books and manuscripts, metal objects, paintings, collection of fabrics and handicrafts, porcelain and pottery, wooden objects etc.
Hope to enjoy and have a nice stay in Isfahan.