The Nasir ol Molk mosque is one of the old mosques of the Shiraz city.
The mosque is located in north of the Zand street and near to the Shah Cheraq.
This building was built by order of Mirza Hasan Ali Khan, famous for Nasir ol Molk who was one of the lords and nobles of the Shiraz.
The construction of the building began in 1876 and ended in 1888 during a 12 year period.

The renovation and maintenance of this glorious and valuable construction began based on international standards for renovation of historical monuments from several years ago which is still in progress.
The colorful doors and windows of the hall were built by Haj Mirza Ayat as one of the skillful architects of that era.
The Nasir ol Molk mosque was built in an area with more than 2890 square meters space.
The mosque is privileged to have most beautiful tiling which attracts large number of visitors from all over the world. Wide range of colorful glasses are used to construct the mosque and that’s why the building is famous for the Pink Mosque.
The mosque consists of two halls which are located in west and east sides of the mosque. The east hall was considered as a winter hall located toward the Keblah which was used during the very warm days of the summer to prevent the direct sunlight.
There is a door behind the hall which opens to a deep well.
The west hall is known as one of the most beautiful halls of Iranian mosques embellished by tile and brisk with paintings of red flowers but the cyan tile of the hall was covered via building repairs were done during about 70 years ago. On the other hand, the pillars of the Nasir ol Molk mosque are among the most attractive pillars of the historical places of Shiraz which begin with a series of interesting flowerpots.
The general appearance of the building is covered mainly by brisk but the tile was also used by architect to avoid uniformity of the building.
In addition, there is also a very beautiful altar in the west hall by creating a dent in the wooden surface of the building. 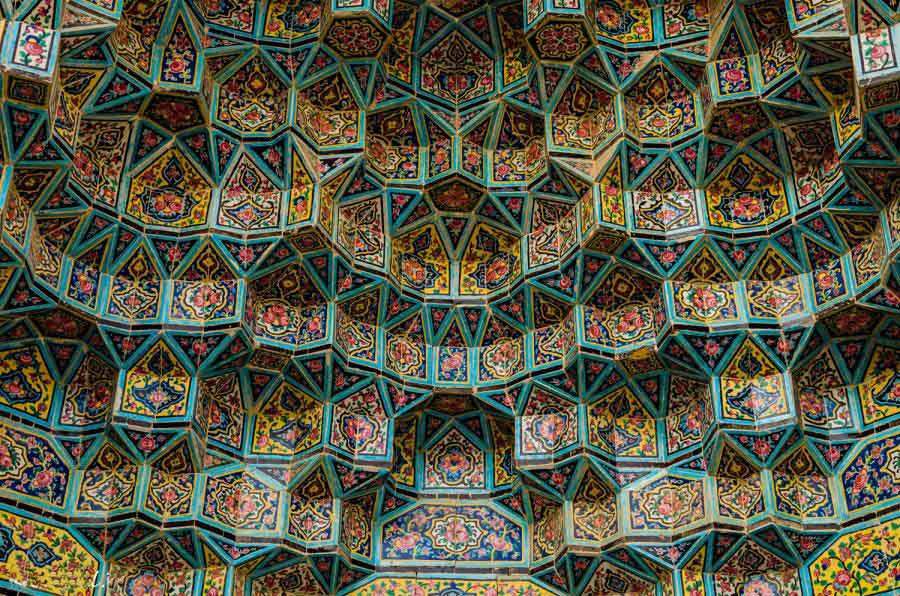 The mosque includes extensive colored glasses in its façade and displays other traditional elements such as the Panj Kase (“five concaved”) design.
It is named in popular culture as the Pink Mosque, due to the usage of considerable pink color tiles for its interior design.
The mosque was built during the Qajar era and is still under protection by endowment foundation of Nasir ol Molk. The Nasir ol Molk mosque is indicating the Iranian architecture in the Qajar period which is shining as a diamond.
All parts such as ceiling, interior and exterior of the mosque are covered by colorful tiles which Qur’anic verses are written on them. The mosque includes a large courtyard located in north of the mosque. Moreover, the entry of the mosque including two large wooden doors is also very attractive and a marble written by beautiful poems is located above them.
It should be noted that some sculptures and embellishments of the mosque are done inspired by the Vakil mosque of Shiraz.
Additionally, the mosque includes also two north and south porches which are not similar and the north one is more beautiful than the south one.
The north porch consists of three arcs in three sides and the forth side opens to the courtyard. Here can be considered as the most effective mosque in Islamic culture. 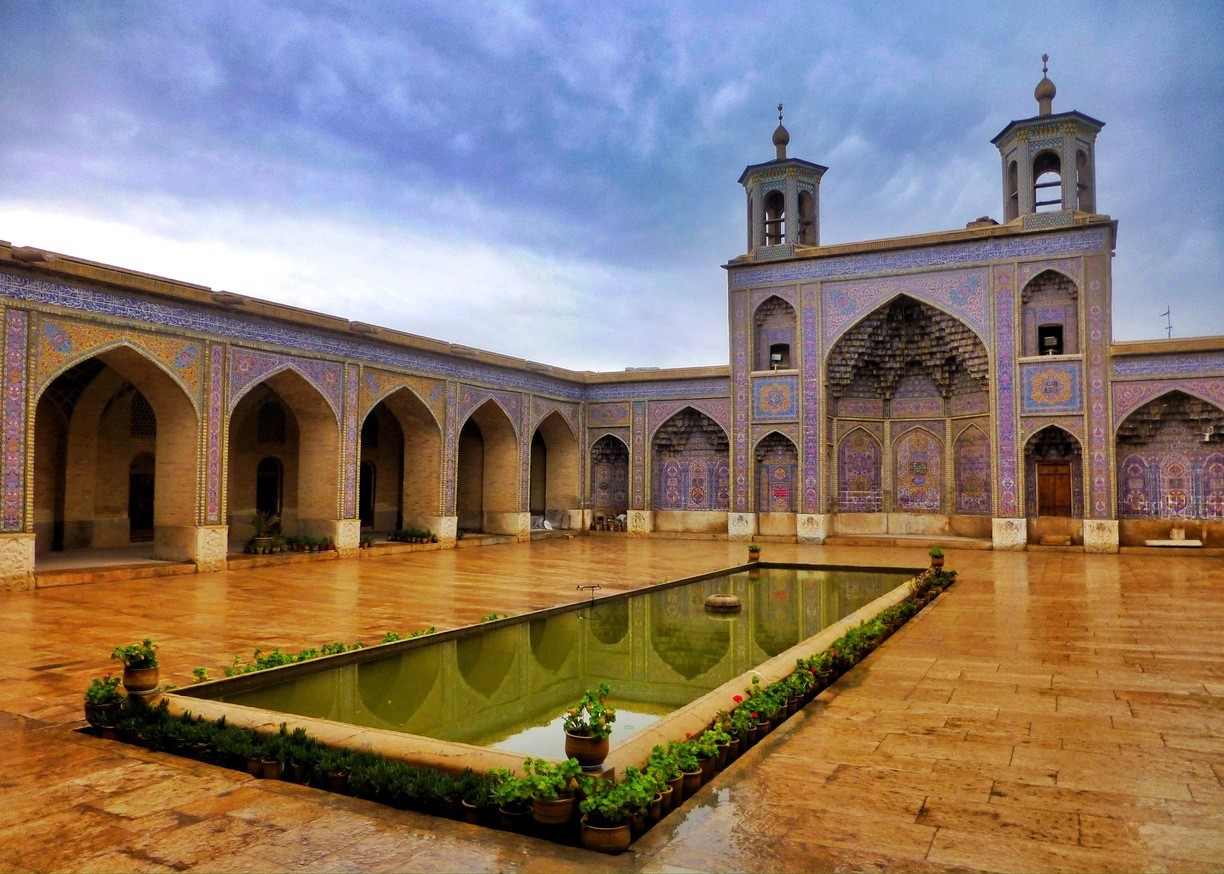 This mosque is still used as a place of worship after more than 150 years and was registered as a national property from 1955 with No.369 in Iran’s cultural heritage organization due to its excellent and unique beauties.
It is noteworthy that the corridors of the mosque are considered as another distinctive and interesting architectural elements of Iran.
The mystery of usage of corridors with dim light in the old structures is that the people usually get used to dark space by entering the corridor and then will face an excellent and spectacular yard. 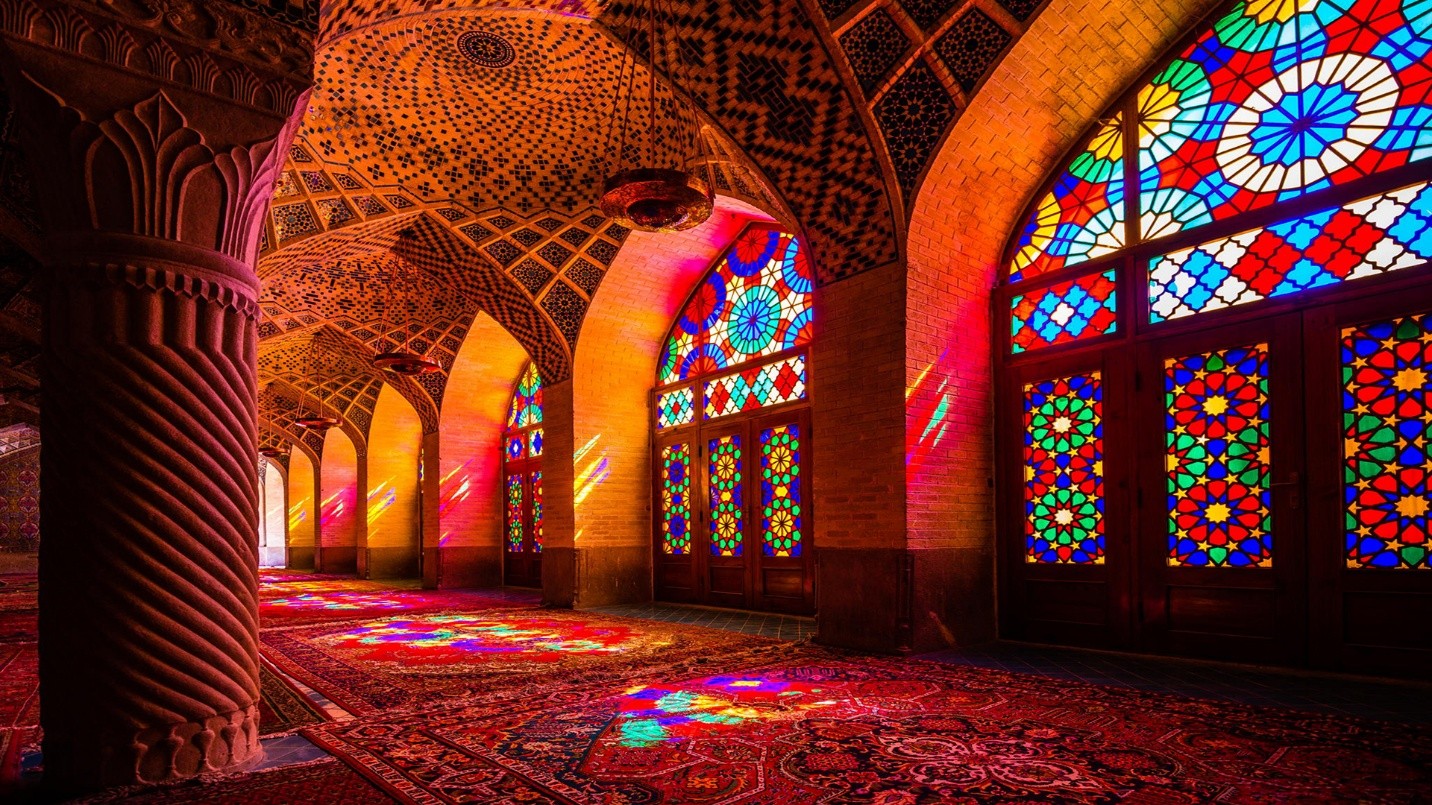 In other words, getting to the bright yard after pass the dark corridor indicates the concept of drowning in the light and end of the darkness.
The courtyard of the Nasir ol Molk mosque was designed by a quadrangle shape and there is a pool in the middle of yard located exactly in front of the porch.
There are beautiful flowerpots filled by geranium around the pool during warmer seasons of the year such as spring or summer to create an interesting atmosphere for dear clients.
We strongly recommend you not to lose this exciting attraction and create a series of unforgettable memories for you and your companions.
Here, you will experience a dreamy travel to the world of colors.

Hope to have an enjoyable stay in historical city of Shiraz.