Isfahan ; The Symbol Of Iranian Art and Culture

Located in the center of the Iranian plateau ,Isfahan is an ancient city of the Iran.

The city was capital of the Iran during 1006 to 1722 in the Safavi period. For this reason it was highly appreciated and a large number of palaces ,mansions and very beautiful bazaars with Islamic and traditional architecture were built.

Lots of them have been registered by UNESCO and can be considered as ancient world heritage.

Isfahan ,due to its beautiful urban appearance ,excellent weather ,a famous river called Zayanderood and bridges with eye-catching architecture ,is one of the main destinations of domestic and foreign travelers.

In 2006,Isfahan was known as the cultural capital of the Islamic world.

In the following ,you will be familiar with buildings ,mosques ,bridges and ancient works of the city.

Undoubtedly ,having heard the name of the Isfahan ,the first place to be found in the mind will be Imam or Naghshe jahan square.
The square is one of the largest squares in the world and there are four historic mansions on four side of the square. 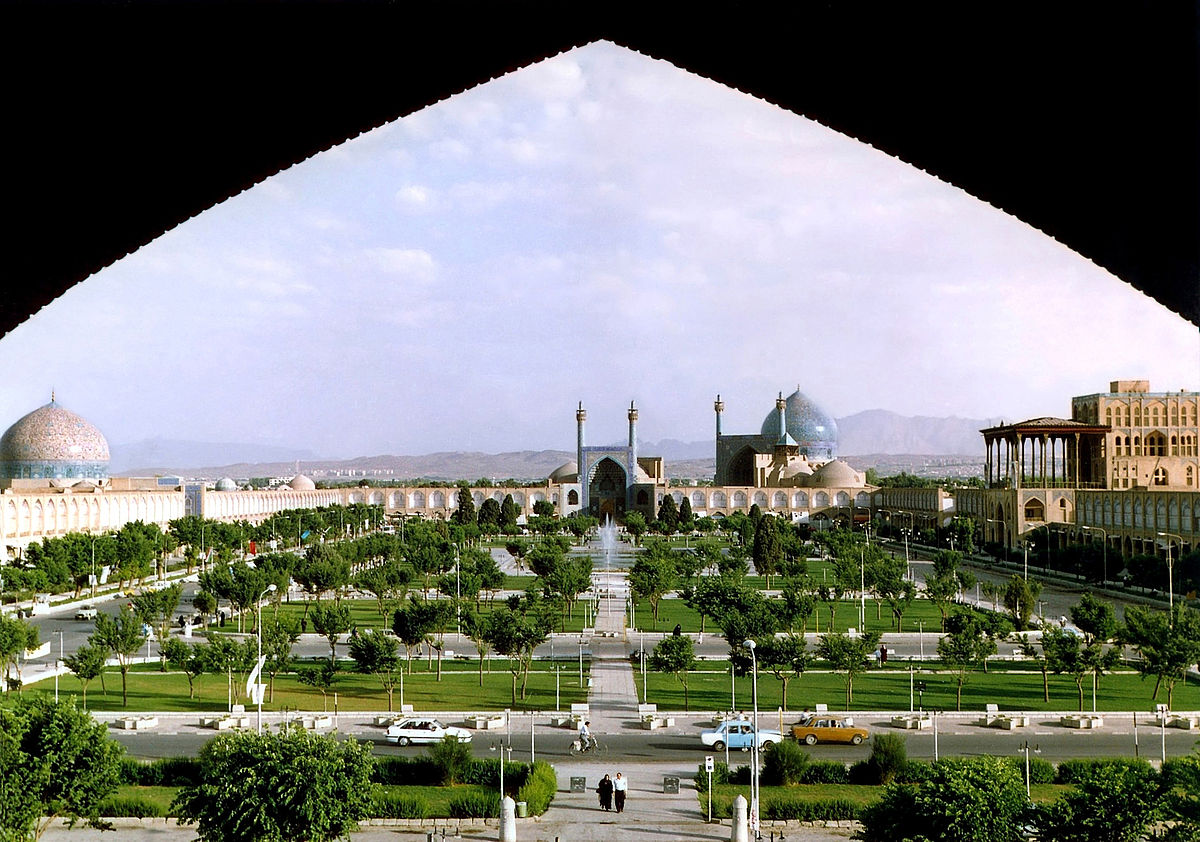 The past function of the square was for holding big celebrations like Nowrooz ceremony .There are two gates in the Square area that show another usage as a ground for special game(Polo) in the past.

Four historic mansions of the square are Imam mosque on the south side,Seikh Lotfollah mosque on the east side ,Alighapoo palace on the west side and Gheysariyeh bazaar’s entrance on the north side.

Imam mosque was built in 1659 with command of the first Shah Abbas with architecture of the 11th century, aiming the joy of the his father’s soul.

The height of the building is about 52 meters that is decorated with very beautiful tiles.
The interesting point is sound reflection under the southern big dome.

There is a huge rock in the part of the mosque, expressing the noon of the Isfahan during 4 seasons of the year in a exact and artistic way. 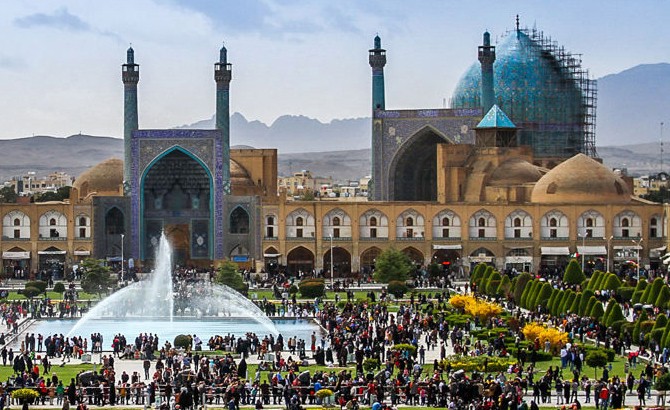 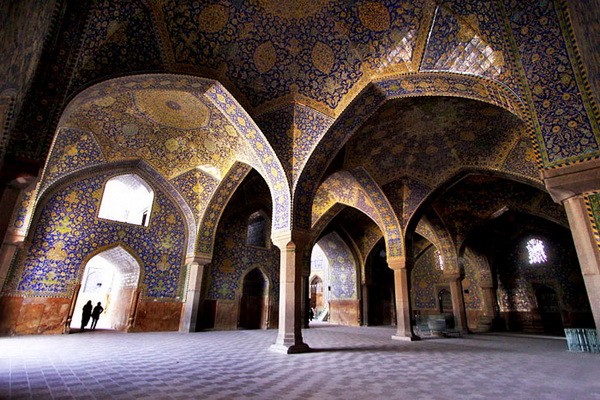 As we mentioned ,Sheikh lotfollah mosque is another building that is located on the east side of the square.

The mosque is famous ,because of its different designs and not having a minaret and a courtyard.

The mosque was built with command of first Shah Abbas and was completed after 18 years.

Its special tiling accompanied with beautiful handwritings ,have been increased the beauty of the mosque.

Apparently ,the mosque was a private place for worship and praying of the courtiers and not usable for public. 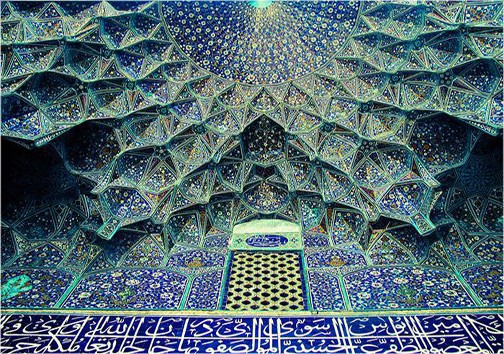 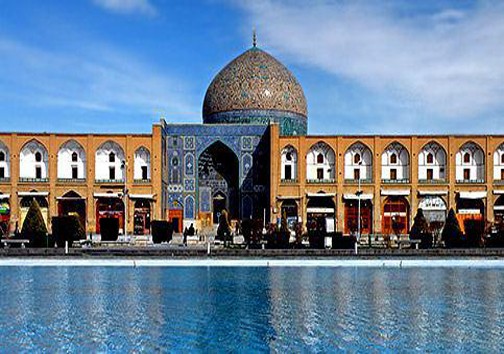 There is a palace called Alighapoo on the other side of the square.

The palace has 6 floors that are available through spiral staircase.

The miniature works of the outstanding artist of Shah abbas era called Reza Abbasi is one of the unique features of the palace and plaster of the music hall on the 6th floor are amazing. 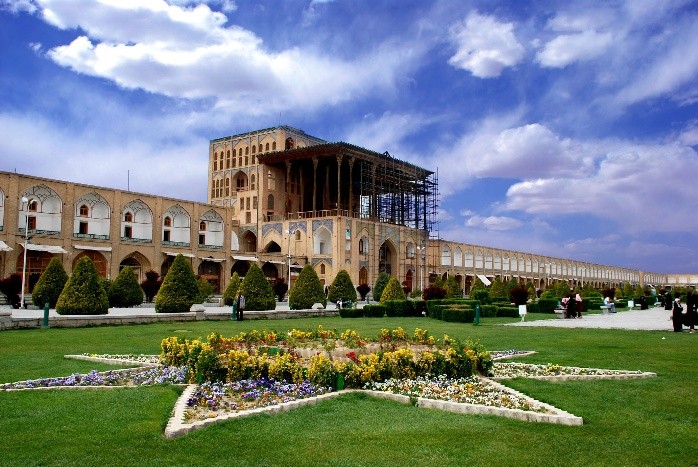 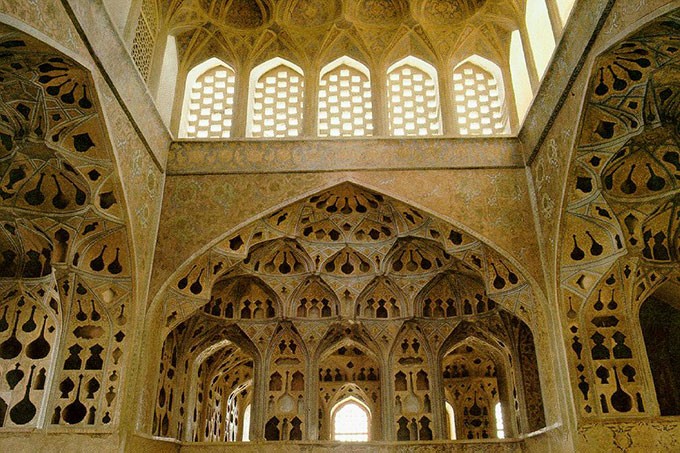 You can see the Gheysariyeh bazaar’s entrance in front of the Imam mosque and north side of the Jahannama square.

The mansion was the main entrance of the bazaar with two large floors.
The second floor was related to official affairs and shops were located on the first floor.

The building has way to the other bazaars and some of them are still active. One of the tourism attractions of the Isfahan is Zayanderood river ,splitting the city into two halves.

There are several historic bridges on the river that are admirable for their engineering of that era.

There is a place called 33bridges on the river and was built in 1626.
The bridge has 33 craters and its name is due to these craters.

The bridge is welcoming the visitors with two passages .One of them is basement with roof and near the water level and the upper one is for visit and recreation.

Khajoo bridge is another famous mansion on the Zayanderood that was built during government of the second Shah Abbas .

There is a special building decorated with beautiful paintings ,in the middle of the bridge that was a special place for temporary residence of the ruling family.

The bridge has 24 craters and can be closed for creating a small lake behind the bridge.
In the past, the craters were close when the kings were standing on the bridge ,creating a spectacular view.

One of the admirable mansions, located in the Ostandari st. is a garden called Forty-pillar garden.

This garden and amazing mansion was built in the Safavi era and was a special place for welcoming  foreign guests.

When people face the mansion from front ,the reflection of the 20 pillar is visible in the water and associate 40 pillars.

The walls of the hall are decorated with miniature works of the Reza Abbasi , famous artist of the Safavi era ,creating a glorified hall. 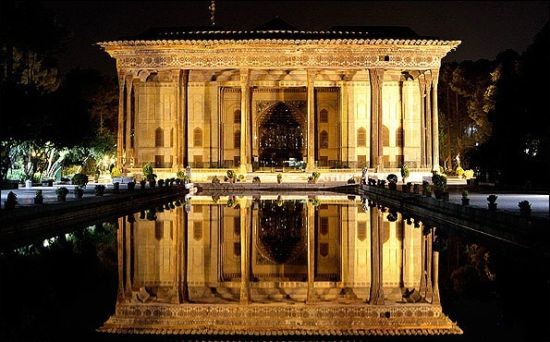 Jolfa is one of the most famous and oldest neighborhoods of the Isfahan that was residence for Armenian people.

Armenians came to the Isfahan with command of the first Shah Abbas in the area beside Zayanderood ,settled and named there Jolfa.

Vanak  church ,as one of the most beautiful buildings of the Isfahan in this neighborhood was built with adobe unlike the other churches.

The dome of the church was built ,adopted from domes of the Iranian mosques while other church’s dome are in cone shape.

All walls of the internal part are covered by amazing paintings, expressing the life of the Christ from birth to ascension.