The Chehel Sotoun palace is one of the historical monuments of the Isfahan city. The palace was constructed in an area with about 67000 square meters space.
The construction of the palace was launched in the reign of the Shah Abbas I and a mansion was built in the middle of it. 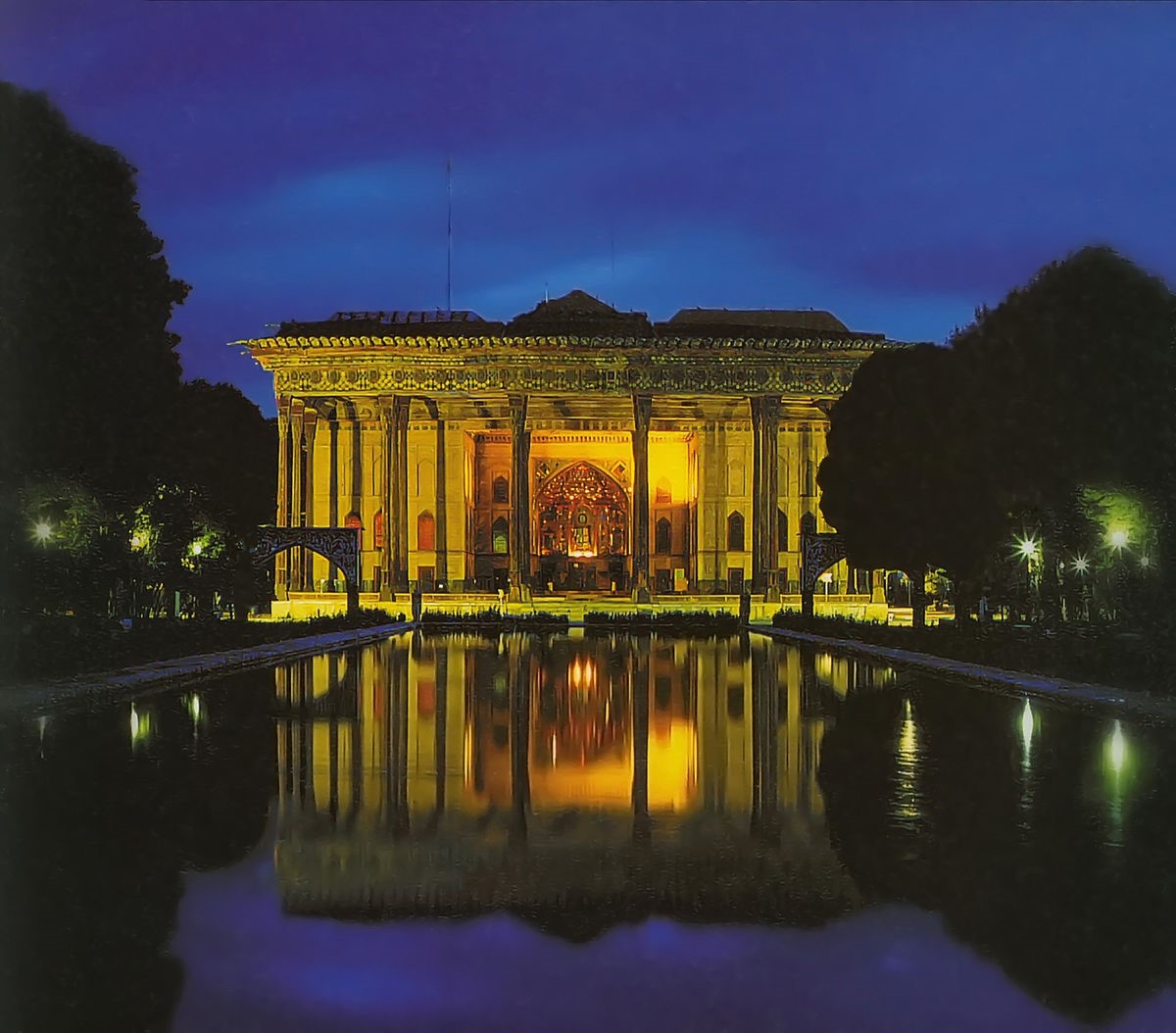 The Shah Abbas I, constructed a palace in the middle of the garden which is known as primary core of the complex.

Actually, he and his successors would receive ambassadors and dignities, either on the terrace or in one of the glorious halls of the palace.

The name of the palace literally means “Forty Pillars” in Persian. In was inspired by the twenty slender wooden pillars supporting the entrance pavilion. The pillars when reflected in the waters of the fountain are said to appear to be forty. 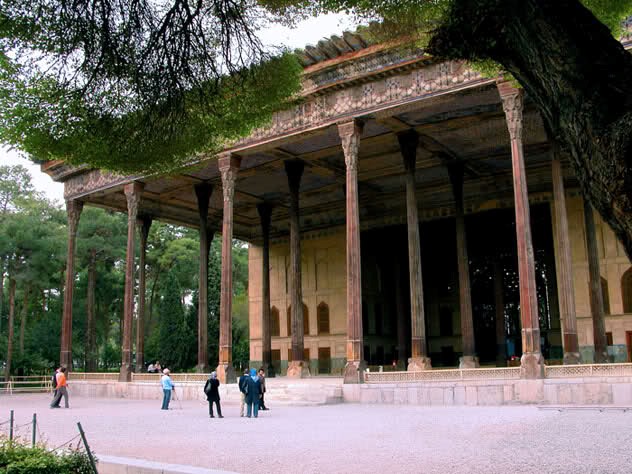 The central hall of the palace was dedicated to reception of the foreign guests including paintings indicating historical events of various periods.

This dignified hall is known as one of the artistic masterpieces of that era because of golden and colorful designs and paintings.

It is noteworthy that general changes have been done in the central building and many sections were added such as mirror hall, twenty columns hall, two north and south large rooms of the mirror hall, the porches located in both sides of the kingdom salon and a large pond in front of the hall.

Moreover, variety of paintings, mirror works and tiling were also added to the building. The palace includes many paintings and frescoes on ceramic. Lots of ceramic panels have been dispersed and are now in the possession of major museums in the west. They demonstrate special historical scenes such as infamous battles, the reception of Uzbek king in 1946 when the palace had just been completed, Humayun who took refuge in Iran in 1544 and etc.

There are variety of exciting sections in the palace which will amaze dear travelers on arrival.

In the following, we mention to some of these parts:

1) The glorified ceiling of the twenty pillars palace and also the mirror ceiling of the mirror hall and the mirror entrance of the Shah Abbas II hall.
2) The huge pillars of the twenty column and mirror halls which are similar to plantain trunk.
3) The stone lion statues located on the four corners of the central pond of the palace indicating the carving industry in the Safavid era.
4) Collection of excellent golden embellishments of the kingdom salon and around rooms of the mirror hall and also huge paintings of the kingdom hall demonstrating kings of the Safavid era. 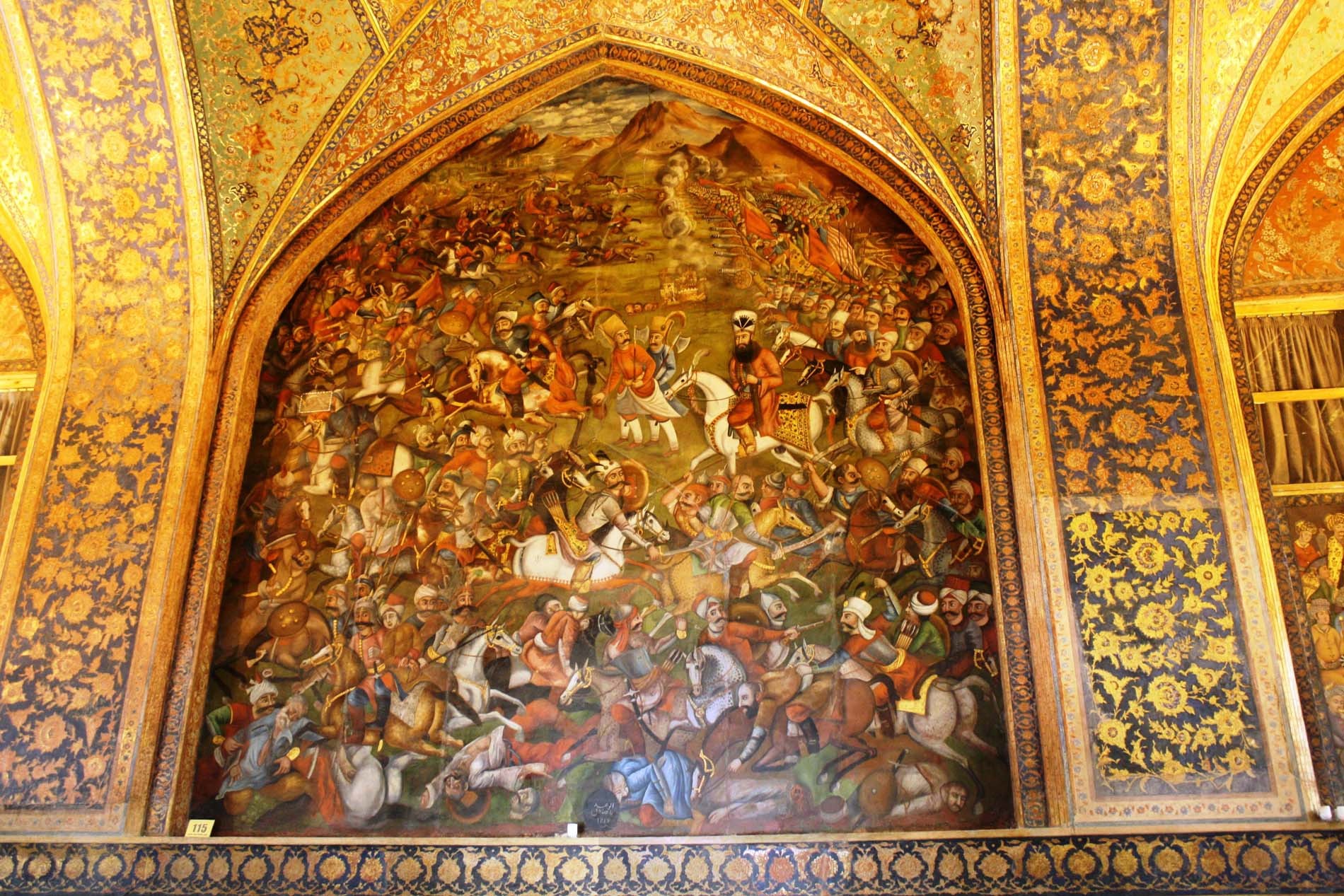 On the other hand, there are also less historical, but even more aesthetic compositions in the traditional miniature style which celebrate the joy of life and love.

In other words, the Chehel Sotoun palace in narrating variety of historical periods via unparalleled and extraordinary paintings. Here, can be an amazing and attractive choice for those who are interested in painting, miniature and mirror works.

In addition, watching the reflection of the pillars of porches of the palace on a beautiful pool of the garden and also large and intimate green space of the garden can be an exceptional offer that nobody should lose it.

It should be noted that the Isfahan city is full of historical paintings and miniatures which offers banquet of design, color, art, architecture and history to large number of visitors from all over the world.

The Chehel Sotoun garden is among is among Iranian gardens which dates back to the pre-Islamic period. The architecture of the garden was designed with a low slope to better water flow in the flowerbeds and watercourses.

Undoubtedly, this palace is known as one of the most diverse attractions of the Isfahan city.

Do not lose this unforgettable historical monument.
Hope to have sweet travel in Isfahan city.